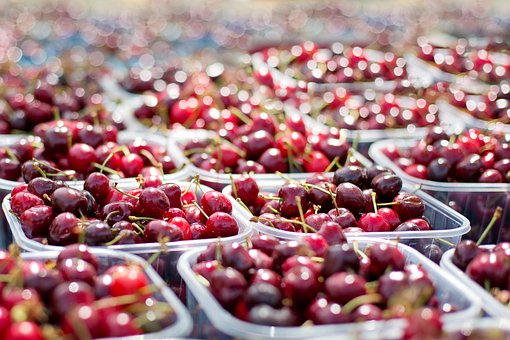 Cherries got their start in the areas of ancient Turkey and Greece, making their way to Rome around 72 BC. They’re in the exact same fruit family as peaches, plums, apricots, and almonds.
While a lot of us associate cherry blossoms with Japan, interestingly, the majority of those gorgeous blossoms don’t turn into fruit. Edible cherry producing trees have been brought from the West in the late 1800s (think what they had been missing all those centuries). However, Japan does not value the fruit as we do, and pies are definitely not on many menus.
In the united states, because of their lovely blossoms, cherry trees have been planted by settlers up and down the Northeast coast. Early French and Dutch immigrants planted thousands in the NY city area in addition to points west, in what is now Michigan. When George Washington purportedly chopped down a cherry tree, he just might have started the ball rolling.
There are essentially two types–sweet and sour. They have a relatively short growing season and are not particularly hearty trees. The U.S. is the second biggest producer of cherries at 300,000 tons annually, after top producer, Turkey, which weighs in with 460,000 tons. Northwest and Midwest states grow the majority of cherries, Traverse City, Michigan reigns as the cherry capital of the world and holds a enormous festival annually. Famous for their sour cherries, they feature the world’s largest cherry pie each year (bring your own vanilla ice cream). The wood of cherry trees is a favorite type for furniture in the U.S.
French chefs have given their seal of approval (what more validation do you require?) And use cherries as a sauce for roast duck, flaming desserts (jubilee), crepe fillings and a favorite tart called clafoutis. Americans love their pies, and although cherry takes a back seat to timeless apple, it ranks in the top 5. And we love them in more ways than one:
flaming cherries jubilee
New York cherry ice cream
cherry sauce
Snacking dried or fresh
duck with cherry sauce
cherry cola
cherry compote
cherry turnovers
fruit dumplings
Chocolate covered candy
wine and liqueur
Not only are cherries good for eating and cooking, but they also tout health benefits as well, including anti-oxidant and anti-inflammatory advantages, decrease risk of gout, promote better sleep, lower uric acid, all demonstrated by research at Mayo Clinic and numerous others. Even though the season is short, they are readily available year-round in canned and frozen forms, and a few markets and health food markets sell juice and dried cherries.
The most popular sweet varieties include Rainier, Bing, and Lambert, the tart varieties belong to Royal Anne, Montmorency, Morello and Early Richmond. But foodie president Thomas Jefferson, who was an avid gardener and horticulturist, cultivated a variety which he believed to be the best, called”Carnation.” All in all, he planted fourteen varieties of cherry trees in his enormous orchard, along with plum, peach, apple and apricot trees. He also planted numerous carnation cherry trees along several walkways at Monticello, because of their highly fragrant blossoms. A sweet dark variety, it was especially prized for eating fresh. Other varieties he incorporated into his cooking. (When neighbor George Washington came to see, were guards posted in the orchard entry?)
So, whatever shirts your hit parade, be it sweet or sour, fresh, baked or sauced, they’re among America’s most beloved fruits. Cherries. Have a bowl.