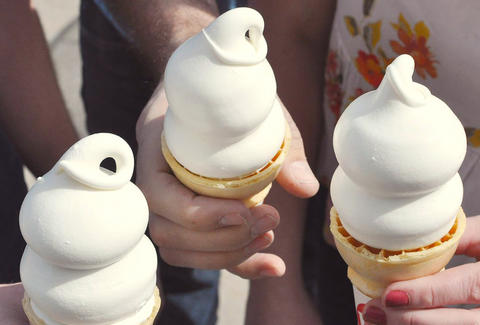 Ice cream has been around and enjoyed for centuries, but the soft-serve concept wasn’t developed until 1938 by Iowa-born John Fremont McCullough and his son Alex. Together they convinced a friend, Sherb Noble, to offer the innovative product in his ice cream shop in Kankakee, Illinois, a small town south of Chicago. On the first day of sales, to everybody’s surprise, Noble dished out more than 1,600 servings of this new dessert within two hours. (Seems like it was a hit.) Knowing they were onto something big, Noble and the McCulloughs went on to start the first Dairy Queen shop a couple of decades later in Joliet, Illinois, placing Mr. Noble at the helm (who better) which opened for business on June 22, perfect timing for the long, hot summer.
For decades, Dairy Queens were and are a fixture of social life in tiny towns of the Midwest and South and from the 70s, keeping up with the times (and the competition), many DQs added quickly food, such as hot dogs, hamburgers and fries, referring to their menu items as”Brazier.” Although a few stores are only open in the summer, most remain open year-round. After all, why eat frozen treats just seasonally if you don’t live in North Dakota? The biggest store is located in Bloomington, IL, home of a state university, Busiest honors go to Prince Edward Island, Canada (go figure). In 2014, Dairy Queen recorded over 6,400 shops in more than 25 countries (75% of which are in the U.S.). For decades, the old adage boasted every Texas town had a DQ. While no more literally true as small-town America dwindles, the largest concentration remains in the Lone Star State.
All DQs currently offer the Orange Julius drink, a brand that they obtained in 1987, and several shops can be found in food courts and shopping malls nationwide. DQ really has two fan clubs: Blizzard and Orange Julius. Blizzard fans, more than 4 million strong, take their decisions seriously, with an assortment of ingredients and mix-ins available. DQ also offers specialty ice cream cakes, along with their traditional choice of soft-serve treats, cone dippings and toppings.
Across the nation, many single-unit mom and pop stands took notice and opened up on Memorial Day catering to the local children, with walk-up stands, often calling themselves”frozen custard.” No one cared what the name was, it meant vanilla and chocolate creamy cones and cups, possibly a couple of picnic tables to linger at, and an after-dinner treat within walking distance of home. Local children looked forward to their short but sweet hours, which sadly closed after Labor Day. Simple names like Al’s, Bert’s or Tastee Treat began to pop up on busy corners and children rode their bicycles eagerly expecting what awaited them, using a dime or a quarter stashed in their pocket. Rarely did these racks provide more than the two basic flavors, but if one was lucky, there may be a strawberry taste as well (oh, boy). (Writer’s note: her regional soft-serve stand featured green mint, which was on the top, especially with hot fudge.)
Minor competitors like Tastee-Freez and Fosters Freeze both began in California in the 1950s and have less than 50 locations each but continue to thrive with a cadre of loyal customers.
So who’s up for some soft-serve? Any time of year it hits the spot. If you don’t have any stores near you, maybe a frozen yogurt, but it won’t be exactly the same. Check your local shopping mall and you just might luck out. And do not worry: mom was wrong, it won’t spoil your dinner.