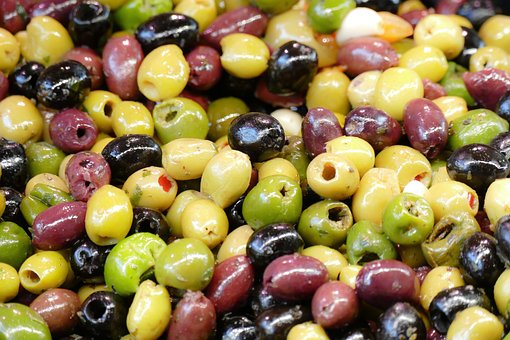 Although olives were grown in ancient Asia and Africa, the country of Spain enjoys to claim top honors in its discovering this particular fruit. However, evidence of olive cultivation can be traced as far back as 5,000 B.C. in Mediterranean countries, which adopted this glorious delicacy, Picture an ancient Roman or Greek scribe pouring over some precious parchment scroll while munching on olives. The Roman poet Horace consumed them daily and proclaimed them to be among the world’s perfect foods. (There weren’t a great deal of food options back then, but he was definitely onto something.)
They are cited frequently in the Bible, both Old and New Testament, and of course who can dismiss the venerable olive branch which symbolizes peace. Hebrew cuisine appreciated the fruit in addition to the oil, which was considered sacred and had many uses, such as oil lamps, personal grooming and religious ceremonies.
The island of Crete made a major impact in the olive industry several thousand years B.C. but has been dwarfed in contemporary times by larger and more populated nations. Case in point, Spain takes top honors for introducing olive trees to the Americas, where they showed up around the time Columbus raised his sails and headed West. (Who knows, maybe Columbus had something to do with it.) It’s thought that Spanish missionaries in the 18th century brought the olive tree to U.S. land as they traveled up through Mexico, finding their way to the rich soils of California before it was settled and attained statehood. Still a significant business in Spain, they boast the greatest production with approximately 6 million tons each year. Italy and Greece place third and second with 2.5 to 3.5 million tons annually. There is no question that the Mediterranean countries lead the pack, as 90 percent of olives are pressed for their precious oil, while the remaining 10% left entire. In general, more olives are produced than grapes, worldwide.
No doubt about it, the U.S. utilizes a hefty share of the yearly yield, not just the California harvest but imports as well. We may not have brought them over on the Mayflower, but when the influx of immigrants started, we were quick to adopt them. Now many food shops feature an olive bar, priced by the pound.
The olive tree is remarkably hardy, and several have been identified throughout Mediterranean countries as over a thousand years old and still producing. They favor sun and hot weather and do not become thirsty as frequently as other agricultural crops, thus making them well-suited to Southern climates. Ancient Roman Emperors ordered them to be planted in the Forum. Greeks appreciated their Kalamata variety, native to the area that bears its name. They graced the dining tables in Israel, Syria and Turkey, featuring their own regional favorites. In South America, the nation of Argentina has proclaimed olive oil a”national food” and is attempting to enter the world economy. They may not be a significant player yet, but they have set their sights on this popular export.
After harvesting, olives require curing since they cannot be eaten right from the tree. (Do not even think about it.) A lengthy process is necessary, using lye, brine, water or salt, with a fermentation period to eliminate the strong bitter taste. For petroleum production, the first press is Extra Virgin, the highest quality. The next press is simple olive oil. It is interesting to note that most cooking oils need chemicals or industrial refining, while olive oil is an exception. (No wonder it’s good for us.)
Coming late to the party, Japan’s island of Shodoshima, (or affectionately called”Olive Island”), produces a high quality olive oil that started in 1908. Clearly not a participant in the business, the Japanese folks seem content with their own unique crop and keep it to themselves.
So don’t limit your repertoire to just eating them whole or fishing them from martinis. Cast your net wider and include them in a variety of recipes. They add flavor, color and a bit of oomph to just about everything. But just as a cautionary note, if you do not buy the pitted ones, then please give your guests and family a”heads up!” Nobody wants a wonderful meal spoiled having an emergency trip to the dentist.